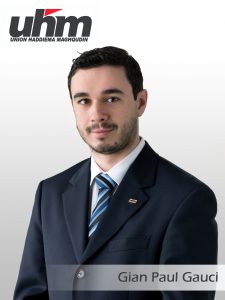 Gian Paul Gauci is the Senior Secretary for the Health Services Section at UHM.

Gian Paul Gauci was born in Pieta’ on the 14th of January 1986. He received his formal education at St. Francis School Birkirkara and St. Aloysuis College. He graduated from the University of Malta in Library and Information Studies, while he also possesses two Diplomas in Music Theory and Music Composition.

Mr. Gauci worked as a Library Assistant at the University of Malta, whereby he used to Catalogue and Classify various subjects. He also Created and Implemented the Digitization of Dissertations Project (ETD) at the same University.

As a Secretary he managed to negotiate and conclude successfully 11 sectorial agreements whereby a number of reforms in the sector were introduced.