The Union Haddiema Maghqudin (UHM) was founded on 29 September 1966, under the name of Malta Government Clerical Union (MGCU) with membership restricted to clerical employees in the Public Service. Salvino Spiteri and Maurice Agius respectively were the Union’s first President and Secretary General.

The Union was very well received by clerical employees and its membership immediately was encouraging. Its fruitful services to members and the various gains and achievements in improving the conditions of work of clerical employees, soon made the MGCU very popular among employees in the Public Service. It was recognised as a Union which acted and delivered. It was therefore not surprising that the Union was being continuously asked and pressed to extend its membership to all employees in the Public Sector.

The several requests made to the Union for the extension of membership could not be ignored and, therefore, after making the necessary arrangements to ensure that it would cope with the added volume of work that such an extension would bring upon it, by Resolution of the June 1973 General Conference, the Union changed its name to Malta Government Employees Union (MGEU) and membership was extended to all categories of workers in the Public Service, Parastatal Bodies and Public Corporations. Following this extension membership increased considerably and the Union continued to get stronger and to command more influence in the trade union field.

The year 1977 was characterised by a wave of industrial unrest due to several arbitrary changes in the conditions of work of employees in the Public Sector. In the case of a large number of Public Service employees, vacation leave was reduced drastically. Public Holidays for both Public and Private Sectors employees were also cut down substantially. Workers on sick leave, in both the Public and Private Sectors, were enjoined to report their sickness at local Police Stations and policemen called at their homes, at any time of the day, to ascertain that those reporting sick actually stayed at home – a new version of house arrest. All this was done without any consultations whatsoever.

This Union launched a protest campaign and directed workers to resort to partial industrial action. Although these were mild actions, Government’s reaction was unduly strong and drastic. Repressive punitive measures were taken against workers who followed Unions’ directives. Government decreed that partial industrial aciton was not to be tolerated. At the time, unfortunately, not all the unions on the Island realised the gravity of the situation.

In the light of the prevailing circumstances, it was felt absolutely necessary to make a serious evaluation of the situation. The need to strengthen the local free trade union movement was strongly felt and to this effect it was resolved to have another general Union which could also offer membership to workers in the Private Sector.

Work on such a project was immediately taken in hand by the General Council of the Union. A number of small craft unions were approached and these were found more than forthcoming. They agreed to merge within the folds of such a Union. Various groups of workers in the Private Sector also showed their readiness to join. 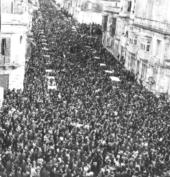 On 13 July 1978, the Union’s General Conference unanimously adopted a Resolution whereby the MGEU was to become the UNION HADDIEMA MAGHQUDIN which, besides widening the aims of the Union, also opened its doors to all workers irrespective of class, sector or grade. The new name of the Union – UNION HADDIEMA MAGHQUDIN (UHM), together with the necessary amendments to its Constitution, were registered with the Registrar of Trade Unions on 8 August 1978.

The Union Haddiema Maghqudin was welcomed by all who cherish free trade unionism. Almost all craft Unions, except for a very few relatively large ones, chose to merge with the UHM and a large number of workers, from all sectors, joined its ranks. Within a very short time the Union’s membership shot up considerably.

Soon the Union felt that, in view of the increase in membership, it could not function effectively from the premises that it occupied in Valletta, as these had become rather inadequate. So the General Council decided that a new General Headquarters should be found. The new offices, from where the Union still operates, were inaugurated on 29 September 1989, i.e. on the Union’s twenty-third anniversary.

The membership of the Union Haddiema Maghqudin continued to grow steadily, and in March 1996 the Union decided once more to extend its membership, this time to include pensioners. This again resulted in a significant number of new members, who before were barred from joining the UHM.

The UHM today represents over 26,000 members and include workers from all walks of life and also pensioners.